Ratcheting socket wrenches are some of the frequently used tools in garages and workshops. Thanks to these wrenches, removing or tightening bolts and nuts has become easier, more efficient, and a lot safer. But ordinary ratcheting socket wrenches can also go so far. While they can do the job, tightening and loosening a single bolt or nut can take several seconds or more. You’ll spend an hour or more cranking that wrench just to loosen or tighten nuts and bolts in one single major project.

Thankfully, modern mechanics and DIYers don’t have to rely on good old elbow grease anymore. While there’s still a place for these hand tools, they can just purchase an upgraded version of ratcheting socket wrenches that are powered by compressed air or electricity to do the job. Let’s take a closer look at these modern socket wrenches. But most importantly, we’ll focus on battery-powered ratchet wrenches, and help you choose the best cordless electric power wrench for your garage or workshop. 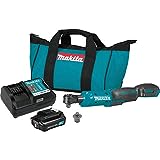 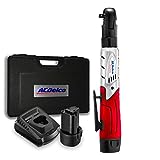 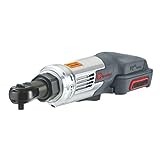 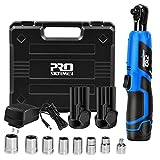 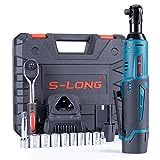 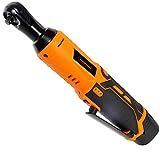 Milwaukee is a trusted name when it comes to power tools, equipment, and hand tools. The quality of the tools produced over the years is superb and the performance is reliable. This Milwaukee M12 Cordless Ratchet Wrench is no different.

This tool can deliver as much as 35 ft-lbs of torque. Its powerful motor ensures that loosening or tightening nuts and bolts is a piece of cake. Plus, the battery and charger performance is great overall. You can rely on it whether you’re performing maintenance work in your garage or assembling scaffolding at work.

Unfortunately, no product is perfect, and this Milwaukee electric ratchet wrench is no different. Overall, however, it is still a good and reliable tool.

Makita has been around for more than a century, and it has certainly mastered the art of engineering and manufacturing power tools and equipment. The Makita RW01R1 Cordless Ratchet Kit is a testament to the company’s dedication to quality.

What sets this Makita ratchet wrench is its interchangeable anvils. You don’t need to buy a new 3/8″ ratchet wrench or a separate 1/4″ tool thanks to this tool.

It’s the most expensive ratchet wrench on the list, but its durability and performance make it worth the price. It already has a charger and lithium-ion battery, plus a tool bag thrown in.

The handle feels solid, but the placement of the battery can be improved. The battery, along with the base, feels and looks bulky.

This KIMO Cordless Electric Ratchet Wrench is one of the best products on the list. Unlike other brands, it already comes with some of the things you need to make it work. These include the two 20V KIMO lithium-ion batteries, charger, its own durable hard case, and a drive adapter.

The handle is textured to ensure that it won’t slip from your hand while you’re tightening nuts and bolts. It has a convenient push-button variable speed trigger. Plus, you can lock it whenever it’s not in use with the convenient lock switch.

All in all, this is one of the best cordless electric ratchet wrenches.

The ACDelco Cordless 3/8″ Ratchet Wrench is arguably one of the better tools in the list thanks to its durability, strength, and portability. Its body is slimmer than other ratchet wrenches on the list, and on the whole, it’s lighter, too. Tightening or loosening a nut or bolt in your car engine will be easier thanks to this tool.

One feature that stands out is its forward and reverse lever. Other tools only have a simple on/off trigger with variable speed, but you can easily transition while working with its forward/reverse lever.

It comes with a protective hard case, plus a charger and batteries. But the batteries leave much to be desired as they drain easily.

Whether you’re a mechanic, carpenter, or a DIY enthusiast who only has time for projects over the weekend, you’ll certainly love this Ingersoll Rand R112 Cordless Ratchet Wrench. Its overall weight and cordless design ensure that you can always have it on hand whether you’re working in your garage or in a job site where you don’t have access to an air compressor. All you need is the lithium-ion battery to power it up, and you’re good to go.

Loosening and tightening nuts and bolts are a breeze thanks to its powerful 30 ft-lb of torque. The gear train is housed in a metal casing, so it will last for years.

Despite its positive qualities, it is not without its shortcomings. Its body is too wide, making it difficult to wiggle into tight spaces. The battery life also needs to be improved as it only lasts a few hours of heavy use.

Keep in mind that you need to purchase the battery and charger separately, so that can add up to the cost.

The Prostormer Cordless Ratchet Wrench Set is a good tool to have in your garage or workshop — if you’re not going to use it for hours on end. It produces anywhere between 22 to 30 ft-lbs of torque, so you can tighten or loosen nuts and bolts while giving you greater control.

What’s great about it is that the essentials are already included. When you purchase the Prostormer Cordless Ratchet Wrench Set, you’ll also receive a durable carrying case, several sockets, the battery, and the charger.

Keep in mind that this tool is not meant for heavy use. It’s good for weekend warriors, but if you’re going to use it for hours on end, then be prepared to be disappointed.

If you’re feeling rather adventurous and want to try something new without spending too much, then the S-LONG Cordless Ratchet Wrench just might be the perfect tool for you. Although it is one of the cheapest ratchet wrenches on the list, you’ll be amazed at what is included in the package.

This ratchet wrench includes a hard case, a lithium-ion battery, and a charger. The manufacturer also threw in a manual ratchet wrench, eight sockets of different sizes, an adaptor, and an extension sleeve for good measure.

My only gripe is that its weight can cause operation fatigue when used for several hours. Other than that, this is a fairly good product.

This AOBEN cordless ratchet is designed for users who need a lot of torque (about 35Nm) to remove or install bolts or nuts of various sizes. It has a powerful 12V motor that delivers excellent performance. The motor also provides a superior fastening speed of 280 RPM. This fast speed is easily controlled by the variable-speed trigger.

This versatile and strong cordless ratchet is inexpensive, yet it has a high-quality 12-volt motor that delivers around 35 ft-lbs of torque. When combined with its compact design and versatility, the strong motor ensures exceptional performance.

You probably have this type of ratchet wrench in your garage or workshop already. This is a very common hand tool that is frequently used in garages and workshops everywhere.

The metal handle of some ratchet wrenches is sometimes bare, but others are wrapped in non-slip textured plastic to make handling easier. The shaft is made of durable metal that is capable of handling extreme loads.

Want to learn more about how a ratchet screw works? Then check out this video.

A lot of ratchet wrenches already come with sockets of different lengths (shallow, standard-length, and deep), and are sold as a set.

But an ordinary ratchet wrench can only do so much. That’s why in recent years, engineers have developed a ratchet wrench with a motor that is powered by compressed air.

The ratchet head is basically the same, but the difference is located in the handle of the tool. Air-powered and electric ratchet wrenches have a powerful motor inside their handles. Now you don’t need to crank the tool repeatedly to pry loose or fasten a bolt or nut. Just press the trigger, and watch it do wonders.

To use the ratchet wrench, you have to attach the air compressor’s fitting to the tool. Press the throttle lever or trigger to turn it on or vary the speed.

Air-powered ratchet wrenches make the job simpler and more efficient. But some workshops and job sites don’t have air compressors (or you can’t afford to buy one right now). Some job sites are so large that they require ratchet wrenches that are portable.

Portability and slim design are two of the main advantage of electric ratchet wrenches. They are also safer as there are no dangling hoses that might trip someone in your workshop.

Cordless electric ratchet wrenches are designed to be as lightweight as possible. They have some features that ordinary ratchet wrenches do not have, such as an LED light that illuminates the work area (a boon for mechanics) and a battery gauge.

Looking for more other great gift ideas for yourself or a friend? Then check out our best cordless drill review and best step ladder review.

Ready to buy your first cordless electric ratchet wrench? Then check out our buying guide below.

So, what’s the best cordless electric ratchet wrench out there?

In my opinion, the Milwaukee M12 Ratchet Kit is the best cordless electric ratchet wrench on the list. It is equipped with everything you ever needed in a cordless ratchet wrench. It has a powerful motor that produces 35 ft-lbs of torque, giving you greater power and control in loosening and tightening nuts and bolts.

Portability is its greatest strength. It comes with its own lightweight M12 lithium-ion battery, so you can work wherever and whenever you want. The metal housing ensures that it last heavy use for many years. Although the body itself is not contoured to your hand, the non-slip hand-grip more than redeems it.

The Milwaukee ratchet wrench is not perfect, but its pros more than make up for that. If you’re looking for one of the best cordless electric ratchet wrenches available online, then this is it.