Sliding miter saws are a must-have for any workshop or jobsite. This powerful tool can make fast, accurate, and smooth crosscuts within seconds. Aside from crosscuts, you can also use it to create a bevel, miter, and in some models, compound cuts.

If you’re new to woodworking, finding the best sliding miter saw can be a challenge. All you wanted was a sliding miter saw that can make crosscuts and angled cuts, but here you are, presented with an array of choices that have features you don’t know what to do with.

We have assembled and reviewed seven of the best sliding miter saws you can buy online or in your hardware store. Learn about their pros and cons, and see which sliding miter saw is perfect for your workshop. 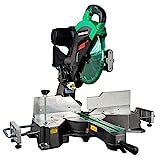 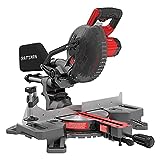 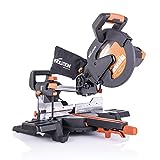 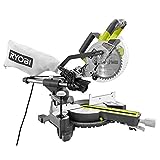 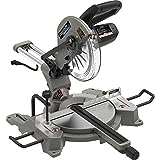 The Bosch Power Tools GCM12SD 12 Inch Sliding Glide Miter Saw is one unique product. It is the only sliding miter saw on the list that is built with an axial arm instead of rails. Apart from its space-saving design that is perfect for compact jobsites, it also allows you to reach the edge of a wider workpiece easily. The arm’s back and forth movement is also smooth.

Crosscuts and miter cuts are a piece of cake for this tool. Unlike other miter saws, it has a dual bevel system that lets you tilt the saw left and right to make bevel cuts. It’s not a big deal for some users, but it makes the job easier as the user doesn’t have to reorient the workpiece to make another cut. Plus, its bevel angle range swings up to a maximum of 47° on both sides.

This Bosch miter saw already includes a 12-inch carbide-tipped blade. It comes with a wrench for easy blade change, a vertical work clamp, a dust bag, and a shop vac adapter.

What about the price? This drop saw is one of the priciest on the list, but that is to be expected as it is manufactured by a leading brand and it has some features that other saws do not have.

Check out this DEWALT 12-Inch sliding miter saw if you want a miter saw that can do it all—and does it well. The miter saw has a robust 15-amp motor and sliding rails to cut a board up to 16-inch width. Dual compound action eliminates the need to turn a board over to cut an opposing angle; simply tilt the spring arm in the opposite direction.

The DEWALT miter saw also has a bright LED light that illuminates the cutting field so you can exactly see where you’re cutting, as well as a collection dust bag that can gather up to 75% of the dust it generates.

The Metabo HPT C12RSH2S 12″ Sliding Compound Miter Saw is another drop saw fit for professionals and serious hobbyists. As you can tell, it has a robust 12″ blade protected by a see-through blade guard. Cutting a large, wide, and tough workpiece is not going to be a problem thanks to its powerful motor.

It has a larger baseplate, making it great for cutting longer and wider pieces of lumber. It also makes cutting larger workpieces easier thanks to its adjustable base extension and taller sliding fence.

It has a laser cutting guide, but I don’t think it’s going to be of much use if you’ve been a hobbyist or a builder for many years. While it’s fantastic that its blade guard is transparent, it is colored so it can be hard to see your cut line while working.

It comes with a 5-year warranty. Keep in mind, however, that a heavy-duty miter saw like this carries an equally hefty price tag.

The ability to utilize the CRAFTSMAN V20 even when no electricity is available is its most significant advantage. Lithium-ion batteries are becoming increasingly powerful, and this miter saw can cut through 3-1/4-inch medium density fiberboard up to 585 times on a single charge. It is powered by a CRAFTSMAN 20-volt rechargeable battery (included). The charger for the battery is also included.

This miter saw has a powerful motor that rotates the blade at 3,800 rotations per minute, making it ideal for cutting wall studs, baseboards, and molding. It also slides, allowing it to cut boards up to 8-inch width.

It might not be as popular as the miter saw offered by other brands, but the Evolution Power Tools R255SMS+ 10″ Compound Sliding Miter Saw delivers excellent and reliable performance in the jobsite. As the name suggests, this is a compound sliding saw. It can produce crosscuts, miter (-50˚ to 50˚), bevel (up to 45°), and compound cuts. The miter stops swing both left and right.

It comes with a 10-inch blade that can penetrate laminates, hardwoods, and steel. You can also purchase a compatible 10″ diamond blade if you want to cut bricks, tiles, and other such materials.

This is one of the most affordable sliding miter saws on the list, so it’s a good investment you’re a professional or a hobbyist.

The Ryobi TSS701 7 1/4″ Sliding Mitre Saw is a compact saw that packs a lot of power. Whether you want crosscuts on crown moldings, baseboards, and 2x4s, this compact miter saw can deliver. It can produce miter cuts up to 45° with positive stops at 0°, 22.5°, and 31.6°. It can also create bevel cuts, but keep in mind that this is a single-bevel saw so you’re going to have to reorient your workpiece each time.

It has a see-through blade guard that lets you see your cut line to ensure accuracy. But the highlight of this miter saw is its LED light. If you’re working in a poorly lit jobsite or you have poor eyesight, then you will definitely find this feature useful.

This Ryobi miter saw has a horizontal main handle, as well as a vertical handle for when you want to move it from one site to another.

It’s more affordable than most of the miter saws we have here, making it ideal for hobbyists who are on a tight budget.

The Delta Power Equipment Corporation S26-263L Shopmaster Slide Miter Saw is a good starter saw especially for hobbyists. This is a lightweight miter saw that you can easily move from one room to another or from one job site to another thanks to its arm lock. This mechanism allows you to lock the arm in place to make it more compact and portable.

When it comes to performance, this Delta Miter Saw truly delivered. It can cut hard MDF panels and dense hardwoods easily. It can make basic crosscuts, bevel, and miter cuts. It has a laser guide for improved accuracy, but keep in mind that this feature is powered by a pair of batteries.

This is one of the most affordable sliding miter saws on the market.

Let’s check out these two types of miter saws, and see which one is perfect for you.

Fixed miter saws have been around for more than 50 years, and it has found its way into the workshops of hobbyists and professional builders alike. These versatile saws can produce basic crosscuts, miter cuts, bevel cuts, and even compound cuts.

These saws are ideal for cutting a moderately-sized piece of lumber, as well as crown moldings, trims, and baseboards. It can take on a workpiece as thick as 6 inches, and it is easy to use. Plus, a fixed miter saw is more compact, portable, and affordable than its versatile sibling, the sliding miter saw.

With a fixed miter saw, all you have to do is drop the saw into the workpiece to cut it. But with a sliding miter saw, you have to pull the saw towards you, drop it against the edge of the workpiece, and slide it back horizontally to cut the piece of wood.

But these saws can take a large chunk out of your budget. It doesn’t make sense to invest in a tool like this if you’re not going to use it frequently, and it will just sit in your workshop collecting dust. Sliding miter saws are bulky, and they’re going to take a lot of space in your garage. Some models are also very heavy, making them hard to transport.

If you’ve set your sights on a sliding miter saw, then check out our buying guide so you’ll know what to look for when shopping online or in your favorite hardware store.

Choosing The Best Sliding Miter Saw For Your Workshop

Looking for a miter saw stand to go with your new sliding miter saw? Then check out this miter saw stand review for more. Plus, we’ve got other tool reviews, design ideas, and other helpful information about remodeling your home.

First is its powerful 15-amp motor that delivered an impressive and reliable performance. Couple it with its very sharp 12″ blade, and cutting a piece of tough hardwood or thick plastic will be a breeze.

Unlike all of the other sliding miter saws we have on the list, this one is built with an axial arm instead of rails. It glides smoothly as you cut back and forth, and it’s a space-saver, too.

Bosch designed this sliding miter saw with the ease of the user in mind. The switch is large and ambidextrous — unlike the majority of saws that are created only for right-handed users.

It has a transparent lower blade guard that allows you to see your material as you cut it. The base is solid and stable, while the miter scales are clear and easy to see. This is one of the few saws with high sliding fences that have scales etched on them.

While it uses the tried-and-tested miter lock knob, it stands out with its ergonomic bevel lock lever that is located at the front. You don’t have to reach all the way to the back to tilt the saw left and right when you have it right in front of you.

But this sliding miter saw carries a hefty price tag, so it’s not for everyone. It is a good investment for professionals and serious DIYers who want a miter saw that can take the rigors of the jobsite for many years.

Plus, it’s not the most portable sliding miter saw because of its sheer bulk and weight. You might want to have a dedicated space in your garage or workshop for this tool.