Are you looking for a cut off saw?

A cut-off saw, sometimes known as an abrasive, is a circular saw used to cut metal and masonry. An abrasive disc, comparable to a thin grinding wheel, performs the cutting action. This isn’t technically a saw because it doesn’t cut with consistently formed edges (teeth).

You are in luck because today, we are going to review the best 9-inch cordless cut off saws in the market. 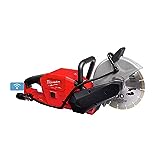 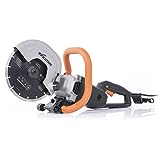 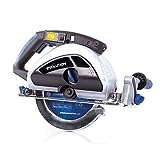 Dewalt continues to improve cordless power and convenience. Cutting rebar is a breeze with the FLEXVOLT 60 V Brushless 9-Inch Cut-Off Saw Kit. We believe it is also beneficial to masonry contractors. This battery powered saw is ideal for light-duty work and as a masonry tool. The dual-sided water system ensures OSHA compliance, which is a significant benefit.

The Milwaukee 9-Inch Cut Off Saw is a new tool in the Milwaukee portfolio, and the designers paid attention to the market and designed a competitive cut-off saw. The friction glide adjustable guard, which the user can modify to any position without using any pre-set detents, was one of our favorites. This feature gives the saw a lot of leeway in terms of how it fits with workpieces and the user’s stance.

The Milwaukee concrete saw is the only one with the One-Key mechanism. This feature allows users to trace the position of their tool, lockout/disable the saw from unauthorized users and manage tool inventory through the One-Key app.

Cutting masonry, metal, and other materials with a mains-powered disc cutter is perfect. Unlike a grinder, this tool was created with the sole purpose of cutting. Benefits include a huge cut capacity for the blade size, as well as an ergonomic design that improves user posture while increasing safety and accuracy. The higher angle on the strengthened skid plate lifts the blade off the floor, allowing the machine to be placed down straight after the cut. Built-in wheels improve precision and reduce user fatigue when performing lengthy, straight cuts at ground level. All varieties of masonry, including reinforced concrete, are easily handled by the powerful electric motor. The balanced center of gravity is provided by the central location.

Evolution Power Tools markets the EVOSAW230 as a professional-grade big steel-cutting circular saw that can cut through soft metals without the use of heat burrs or coolant. This ground-breaking saw established a new standard in industrial metal cutting, especially considering the price tag of this 15-amp heavy-duty metal cut off saw.

When it comes to mild steel cutting, the EVOSAW230 will quadruple your productivity and create perfect-looking cuts that don’t require any further grinding or metalwork.

Stihl was the first business to release 9-inch cordless Stihl chop saws in 2015. The second was Husqvarna. Both of these saws ran on 36 volts and had a reputation for long run times, although they lacked power.

DEWALT then released the 60V FlexVolt in 2018, which we tested last winter and have been using on our job sites. Milwaukee was the last to market in the fall of 2019.

Why would you need a 9-inch cut-off saw, you might wonder?

It’s a reasonable question. These saws are more of an expansion tool for people who are already on the platform than entry-level instruments. We call them “80 percent tools” since they can perform 80% of the duties that a gas tool can.

Cordless cut-off saws have a wide range of uses and “niche wins.” Mechanical contractors use it for fast, ultra-straight cuts in 8” PVC tubing, masonry and foundation contractors use it for basement drainage, and “first-pass” door entrance cuts are just a few examples.  Once space is occupied, don’t forget about call back cuts or punch list applications.

Here are the advantages of 9 inch cordless cut-off saw:

Different Types Of Cut Off Saw

A cut off saw is a simple yet effective cutting instrument that is commonly used in metal cutting. A cutoff saw is a word that relates to two different types of power tools. First, there’s the miter saw, which is commonly employed in the woodworking industry. The abrasive saw, on the other hand, is used to cut hard materials like metals and ceramics. Miter saws are used to make precise angled and bevel cuts. Let’s have a look at the many varieties of cut-off saws.

A manual miter saw is a metal guide that works in conjunction with a miter box to make precise miter cuts. These cut off saws are still infrequently used in picture framing and manual woodworking, but power woodworking tools have mostly superseded them.

These cut off saws are still infrequently used in picture framing and manual woodworking, but power woodworking tools have mostly superseded them.

A power miter saw is a gadget that allows you to make quick, precise cuts at the specified angle. It is extensively utilized in framing and mold cutting activities. The majority of miter saws are light and portable, with blade widths ranging from eight to twelve inches.

An abrasive saw is a power tool that is used to cut hard materials. The cutting motion is performed by an abrasive disc that looks like a thin grinding wheel. For cutting, the abrasive saw does not employ standard-shaped edges. The cutting wheel & motor are mounted on a free arm fixed to a permanent base plate, and it features an integrated vise or clamp.

Since its introduction, the electric cut off tool has aided in the seamless operation of construction sites. Because of their portability, these instruments are also ideal for lightweight steel construction and workshops that use constant power cold saws.

The safety of the workers is critical while utilizing a power tool such as a battery operated saw. So, here are some safety precautions that you may use to keep yourself safe while using a cut off saw.

Although a set of safety goggles may appear to be sufficient, a face cover is strongly recommended to protect yourself from potentially fatal injuries.

If the dust collection system isn’t working properly, you’ll need to cover your nose with a mask.

Before mounting the cut-off wheel, inspect it for any cracks or damage.

During the cutting operation, there are visible sparks. To avoid a fire hazard, keep flammable objects away from chop saws.

Cutting wood, plywood, plastic, and other materials with a cut off the wheel can cause the wheel to load up, resulting in wheel breaking.

These are the several varieties of cut off saws from which you can choose the one that best suits your needs. When using this tool, you should also be concerned about safety, so follow the safety precautions listed above and stay safe when using these power tools.

Pros And Cons Of Using Cut Off Saw

Pros: A cut off saw is a powerful tool that will devour almost anything you put in front of it. A metal cutting cut off saw is by far the greatest option for reliably cutting big chunks of metal.

Another significant advantage is the speed with which metals and other materials may be sliced. Cut off saws prioritize speed and power over precision. Thus, many feature footswitches that allow you to feed metal quickly with both hands.

Furthermore, because the abrasive wheels on cut-off saws are thinner than those on circular saw blades, there is less waste.

What is the purpose of a cut-off saw?

Abrasive saws, also known as cut-off saws or chop saws, are circular saws (a type of power tool) used to cut hard materials, including metals, tile, and concrete. An abrasive disc, comparable to a thin grinding wheel, performs the cutting action. This isn’t technically a saw because it doesn’t cut with consistently formed edges (teeth).

These cut off saws come in different forms, including tabletop, freehand, and walk behind. The cutting wheel and motor are installed on a pivoting arm coupled to a fixed base plate in tabletop variants, which are widely used to cut tile and metal. Tabletop saws are frequently powered by electricity and feature a built-in vise or other clamping mechanisms. On construction sites, freehand designs are commonly used to cut concrete, asphalt, and tubing. The handles and motor are close to the operator, and the blade is at the far end of the saw. Because the materials being cut are heavier & larger, freehand saws do not have a vise. Walk-behind models, sometimes known as flat saws, are larger saws that cut into concrete floors, asphalt, and concrete paving materials from a stand or cart.

What is the distinction between a chop saw and a cut-off saw?

The blade and angle of their blades are the key differences between the two. Miter saw blades can be oriented in a variety of ways, whereas chop saw blades are always inclined at 90 degrees because it is the only cut they can make.

Is it possible to cut wood using a cut-off saw?

A protractor fence and a straight fence are common on chop saws. Although abrasive cut-off saws are typically used to cut metal or PVC, with a few simple tweaks, they may be designed to cut wood as well.

Our clear winner is none other than Dewalt. The Dewalt FLEXVOLT 60V Cordless 9″ Cut-Off Saw boasts a 3.25″ cut depth and a brushless motor w/ a no-load speed of 6,500 RPM. This allows for no messing around with gas, instant-on, and rapid cutting and scoring of concrete and masonry materials. It cuts through steel and rebar with the same efficiency as gas saws. The guard is positioned out of the way to allow for a clear line of sight and good vision in congested areas. There are no belts to change, tension, or maintenance on the Dewalt DCS690 because it has a beltless all-metal drivetrain. The battery and terminals are also protected from water, dust, and other materials by the latched and sealed battery box. A duel-feed water system provides an OSHA Table 1 compliance option for dust management when cutting concrete and masonry materials. The Flexvolt 9″ cut-off saw, 2x DCB609 Flexvolt Batteries (9.0Ah), Dewalt Fast Charger, 9″ Diamond Concrete Blade, and 9″ Abrasive Blade are included in the DCS690X2 package.